The IUCN Environment and Gender Information (EGI) team is pleased to announce the release of a new report on gender and protected areas. In this study, the EGI team investigates reporting on women’s participation in the conservation and management of protected areas by using national reports to the Ramsar Convention and the World Heritage Convention, two widely ratified treaties that govern management of thousands of protected areas worldwide, this study defines the frequency, context, and tenor of discussions of gender and women’s participation in conservation.

Gender inequality in biodiversity conservation and management restricts women’s access to benefits at all levels, perpetuating poverty and undermining sustainable resource use and management. However, gender equality in this field is neither widely written into policy nor widely measured. Keyword searches in this EGI analysis showed that frequency of gender-related keywords was extremely low in reports to both conventions, decreasing by approximately 90% in reports to the Ramsar Convention during the last two decades. Gender keyword mentions most frequently characterized women as stakeholders on management committees, as grouped with other communities often excluded from access to decision-making arenas, and as beneficiaries of sustainable development programmes.

Despite these findings, most reports’ discussions of women lacked sufficient detail for understanding cumulative progress toward gender equality in environmental conservation. This study suggests that greater detail in reporting and establishment of mechanisms that measure cumulative progress toward equal participation of women could help improve our understanding of gender equality in protected areas conservation and management. 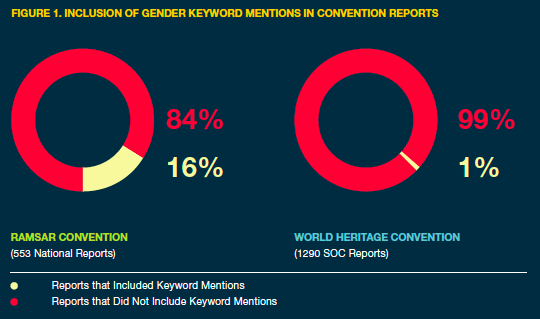 Click here to read Gender and Protected Areas: Exploring National Reporting to the Ramsar Convention and the World Heritage Convention.