Gender & the Convention on Biological Diversity: From policy to practice

Gender & the Convention on Biological Diversity: From policy to practice

Recognizing women’s roles as primary land and resource managers is central to the success of biodiversity policies. A recent analysis by IUCN’s Environment and Gender Information (EGI) platform finds that of 254 total National Biodiversity Strategies and Action Plan (NBSAP) reports —the principal mechanisms through which governments and their stakeholders identify priorities and define modalities for implementing the goals of the Convention on Biological Diversity (CBD)—more than half (56%) contain at least one women and/or gender reference, signaling some acknowledgement of gender considerations in biodiversity action planning. 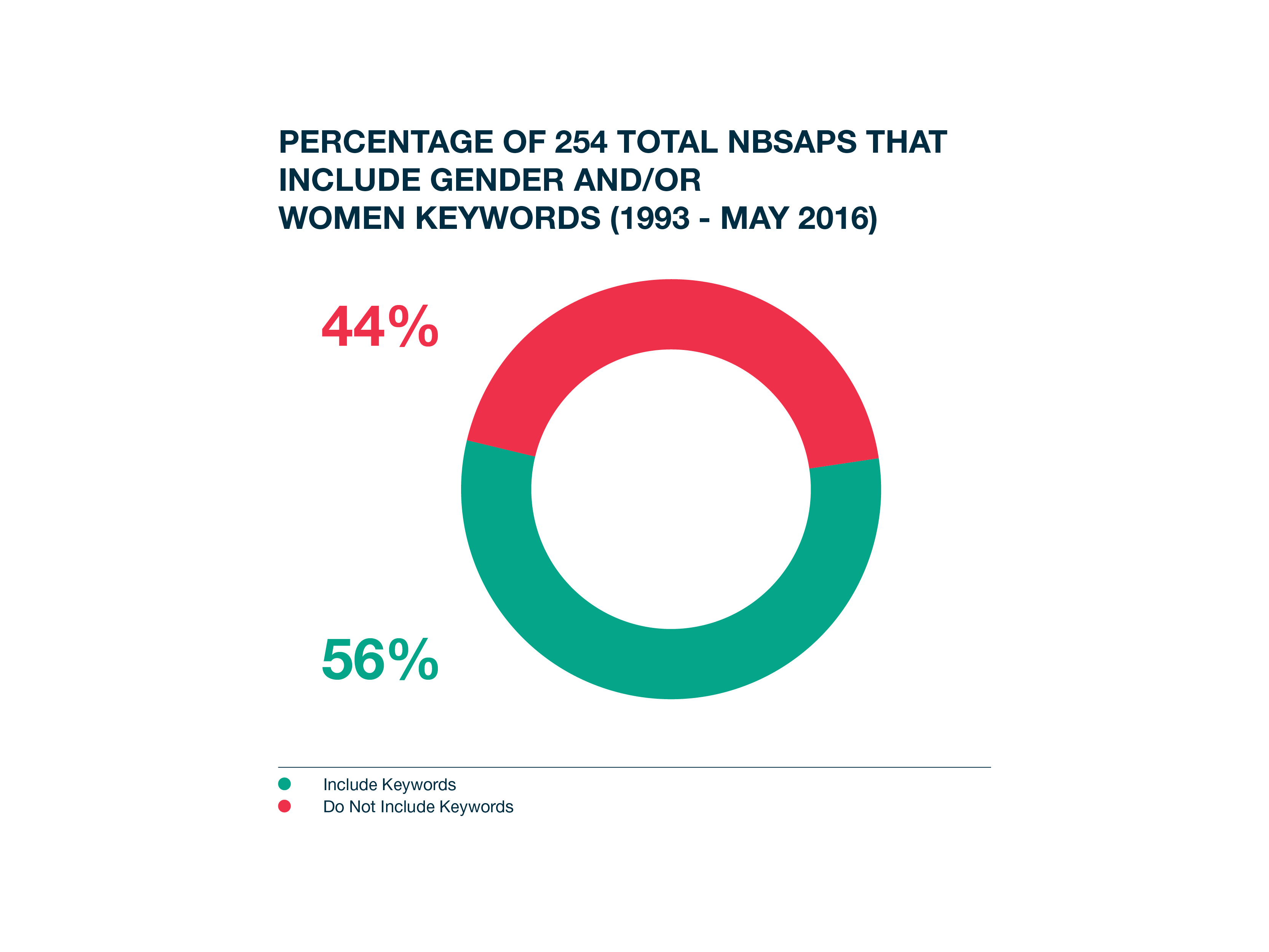 NBSAPs are key for implementing the CBD at national level, and they provide an important opportunity to recognize, build capacity on and develop actions to advance gender equality and women’s empowerment. With respect to how women and women’s participation are characterized in NBSAPs, the EGI finds that most countries (37%) indicate inclusion of women as stakeholders; 27% include reference to women as beneficiaries; 17% refer to women as vulnerable; and the fewest, 4% characterize women as agents of change. 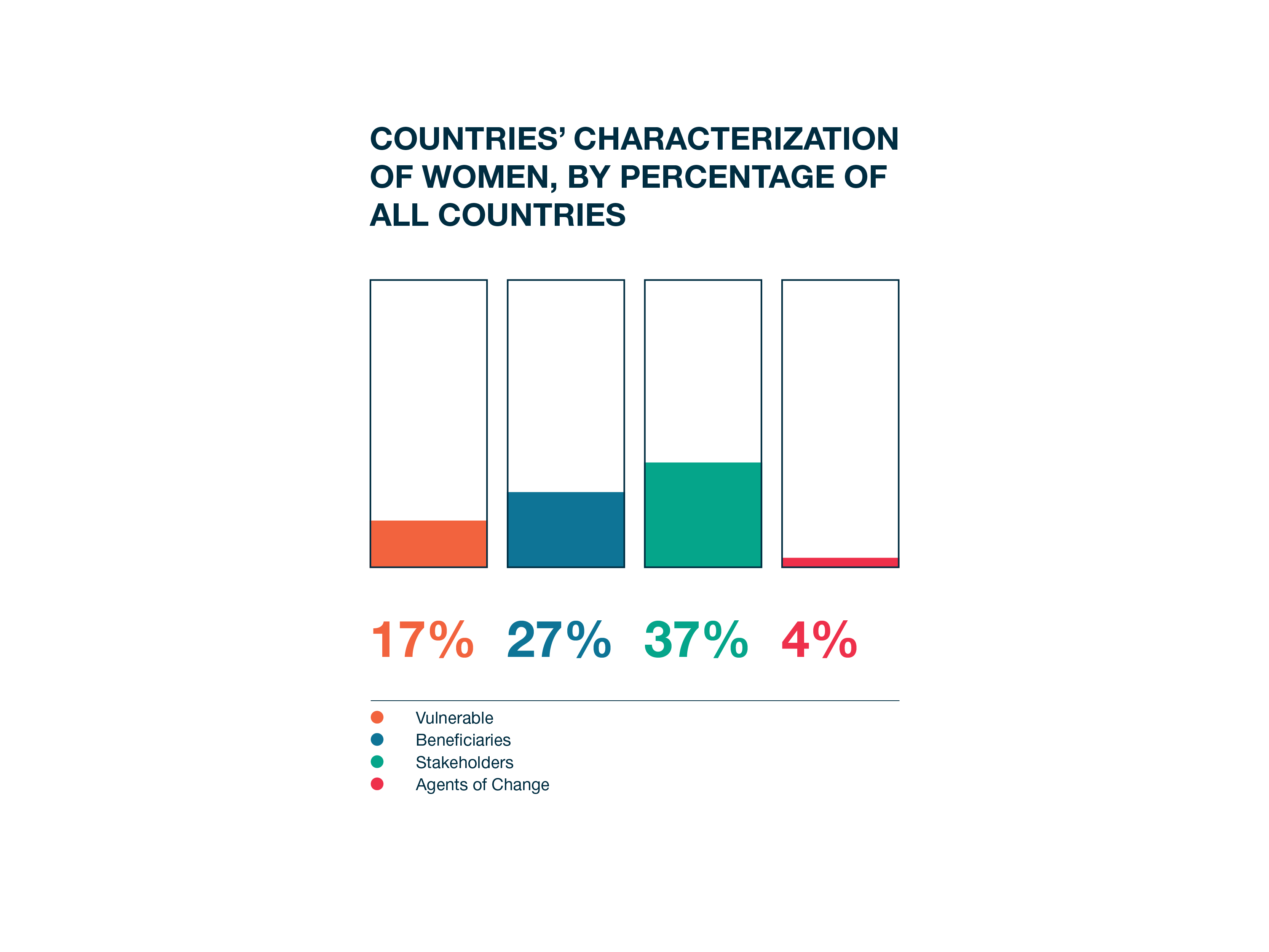 The extent to which, and the ways in which, women’s and men’s unique capacities, gender gaps or gender equality opportunities for biodiversity are integrated into NBSAPs differ from document to document, country to country. For example, 14% of countries include women’s empowerment and/or gender equality as a guiding principle. Approximately one-quarter (24%) of most recent NBSAPs include at least one specific activity geared towards women or otherwise proactively including gender considerations. For example, Trinidad and Tobago’s Version 1 NBSAP allocates US$250,000 for a three-year period to shared management and planning, for which Women’s Federations is a lead implementing partner, among several other ministries, NGOs and civil society organizations.

The CBD has a relatively long and substantial history of recognizing the links between advancing gender equality and effectively meeting its goals. The preamble of the Convention highlights the vital role of women in biodiversity conservation and sustainable use, as well as the importance of women’s full participation at all levels of policymaking and implementation. Over the years, numerous decisions have been taken by the Conference of Parties (COP) addressing and advancing issues relevant to gender equality and women’s empowerment. Notably, the CBD became the first multilateral environmental agreement to have a Gender Plan of Action, which was adopted in 2008 and updated in 2014.

Echoing these common themes across decades of CBD decisions and leadership around gender equality, the EGI also finds that, in at least one NBSAP, 15% of countries reference women as keepers of traditional ecological knowledge (TEK) in relation to their roles as farmers, fishers and elders of indigenous communities, while 24% of countries reference women as stewards of the environment. For example, Zimbabwe’s NBSAP clearly states that the role of women as keepers of TEK and stewards of natural resources needs to be included in the development and implementation of NBSAPs. This understanding of gendered roles and relationships with respect to natural resource management can be used particularly to direct resources to women who already have significant expertise in food production. 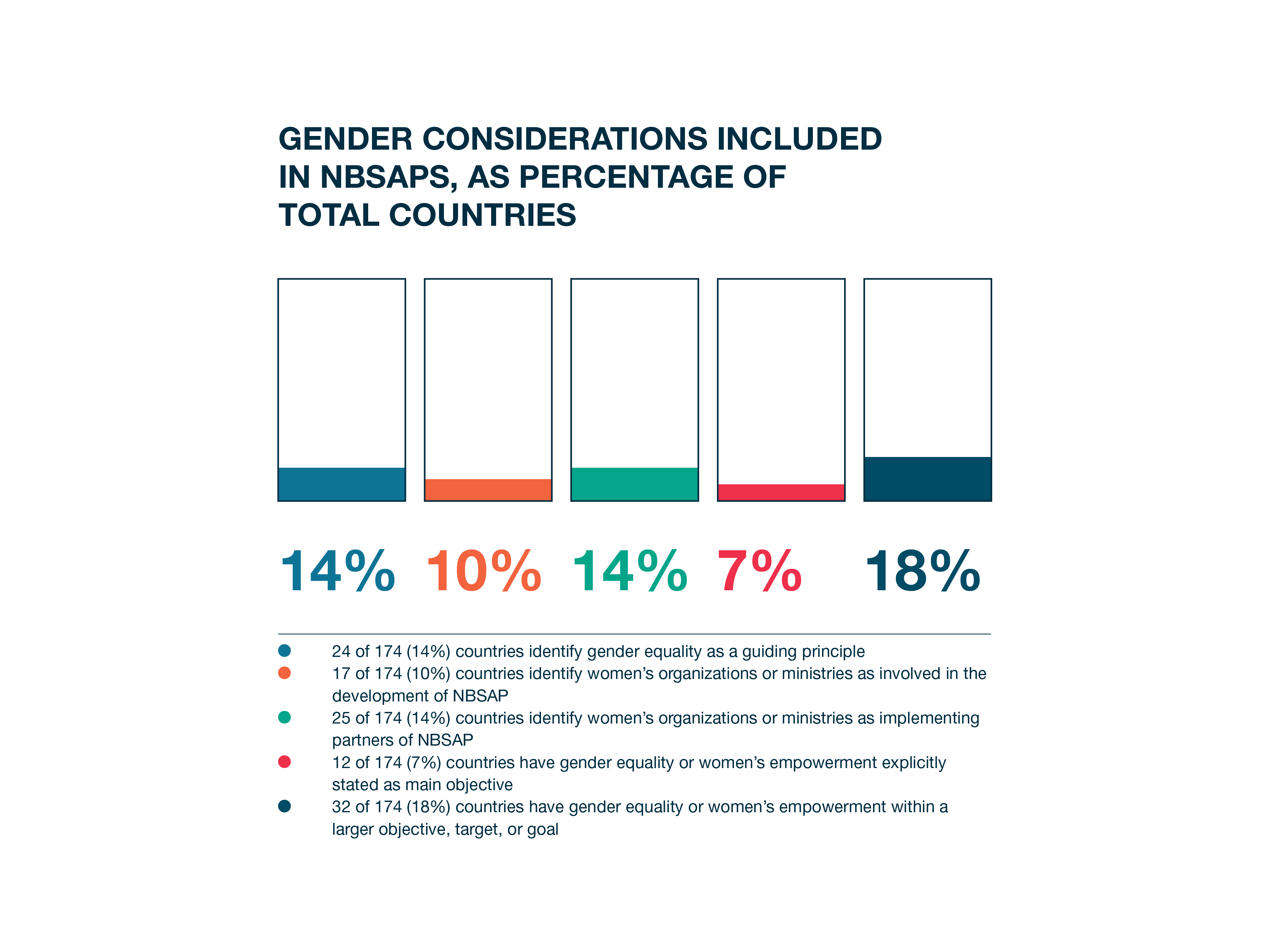 In 2016, the CBD Secretariat, in collaboration with IUCN’s Global Gender Office and country offices and with support from the Japan Biodiversity Fund, implemented a project to build capacity of developing country Parties to integrate gender into their biodiversity policy, planning and programming. The project focused on three pilot countries, Brazil, Mexico and Uganda, to support the integration of gender considerations into their draft NBSAPs being revised to align with the Strategic Plan for Biodiversity 2011-2020 and reflect the Aichi Biodiversity Targets. This process involved bringing together representatives from national governments, women’s groups and gender and biodiversity experts to share information on relevant initiatives, including but not limited to processes under the CBD, and review the draft NBSAPs to identify gaps related to gender issues; aiming to integrate women’s priorities, needs and solutions, and the proposals and recommendations made during respective workshops influenced the finalization of each country’s NBSAP.

Today, each pilot country government has accepted gender-responsive proposals from women’s organizations, ministries and agencies across sectors, and results include the following:

The EGI finding that 56% of NBSAPs contain gender keywords points to some recognition of gender considerations in biodiversity strategy and action planning—and some level of attention to or implementation of gender equality commitments made via decisions by Parties to the CBD, as well as complementary environmental frameworks. While the majority of NBSAPs contain a handful of references—combined, “gender” and “women” are used an average of one to four times in an NBSAP— more awareness raising and capacity building support may help countries fully reap the benefits of gender mainstreaming; recognize women’s and men’s equal rights to a healthy environment; empower and position women as change agents; and promote women’s and men’s engagement and leadership in activities to meet cross-cutting sustainable development goals, such as was seen in Brazil, Mexico and Uganda.

IUCN GGO will be presenting these EGI findings, as well as lessons learned from the process of integrating gender considerations in NBSAPs at the CBD COP13 in Cancun, Mexico on December 12, 2016.