The gender and environment landscape is slowly changing in Brazil – after several years of concerted effort by IUCN to further gender considerations, women have taken a strong lead at the forefront of biodiversity conservation and restoration efforts. On International Women’s Day, we reflect on the journey toward this achievement.

Women around the world are responsible for the management of local ecosystems and, consequently, have a huge impact on the success or failure of conservation interventions. Recognising these important but often overlooked responsibilities and building on earlier commitments to gender equality and biodiversity conservation, in 2014 the UN Convention on Biological Diversity (CBD) adopted the 2015-2020 Gender Plan of Action aimed at integrating the different roles of men and women into biodiversity conservation. This was an important step and represented an opportunity to highlight women’s important roles and responsibilities in its National Biodiversity Strategy and Action Plan (NBSAP). 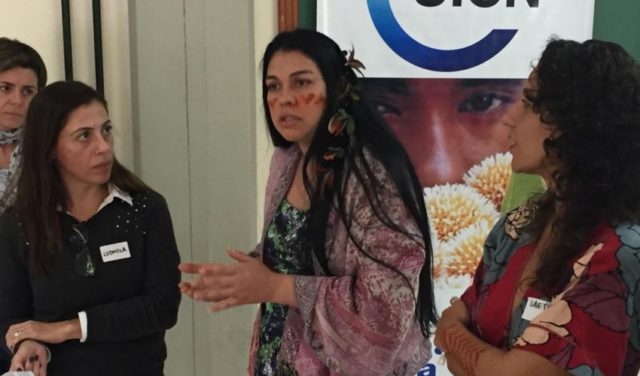 During 2016, the Government of Brazil took initiative to integrate these commitments by working with IUCN to incorporate a gender–responsive approach into its NBSAP. The process began with an intensive and comprehensive review of national policies and institutional initiatives, as well as consultations with key stakeholders, to identify gaps and challenges that needed to be addressed for effective biodiversity conservation.

Using this information, training materials were prepared and a session held for government and non-government agencies involved in implementing the NBSAP. This culminated in a national workshop where participants prepared a series of recommendations to make Brazil’s NBSAP gender-inclusive and responsive. Watch a video of the process here.

The results were remarkable. The original 2012 NBSAP had zero references to women or gender but the revised 2016 version contains 37 specific gender considerations and actions to enhance inclusivity and equality. Essential additions also include an objective to engage and enhance women’s participation as key stakeholders, and integrating sex-disaggregated data into the monitoring and evaluation process.

together stakeholders, assessing challenges and working through the solutions needed to overcome them.

The IUCN team also responded to a request from the Atlantic Forest Restoration Pact (PACTO) to integrate gender into their monitoring protocols for forest landscape restoration (FLR), sparked initially by IUCN’s approach for a gender-inclusive FLR process in Brazil.

Through specific gender and FLR workshops, IUCN helped PACTO devise two socio-economic indicators for their protocol related to the number of men and women who gain employment through FLR, and the increase in incomes of female and male farmers. Additionally, IUCN worked with PACTO to set up a Gender Working Group tasked with integrating a gender-responsive approach throughout the entire FLR process.

IUCN has worked intensively to bring women to the forefront of forest conservation and biodiversity efforts in Brazil, Uganda, Armenia and other countries, and was able to apply these lessons and catalyse action toward a gender-responsive NBSAP process and PACTO’s planned FLR interventions.