At the Global Environment Facility (GEF) Assembly in Da Nang, Vietnam, IUCN is pleased to join efforts in the launch of a free Open Online Course on Gender and the Environment. 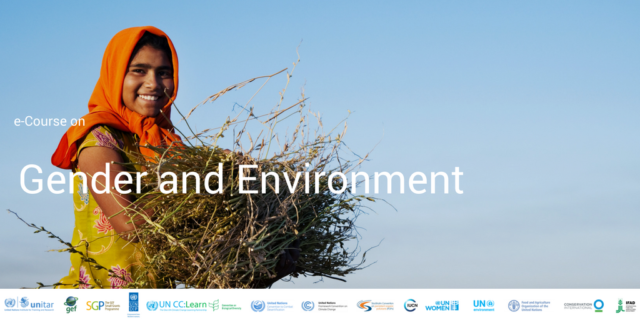 The course is an initiative led by the GEF and Small Grants Programme in partnership with the GEF Gender Partnership, of which IUCN is a core part along with UN Women, UNDP, UN Environment and the Secretariats of the Multilateral Environment Agreements the GEF serves—including the Convention on Biological Diversity (CBD), UN Framework Convention on Climate Change (UNFCCC), UN Convention to Combat Desertification (UNCCD) and the Basel, Rotterdam and Stockholm Conventions (BRS).

The course will provide users with the knowledge and tools to mainstream gender towards effective sustainable development. Offering facts and figures, it informs participants of relevant global frameworks and the key gender and environment linkages across biodiversity, climate change, land degradation, international waters and chemicals and waste sectors.

IUCN’s mission speaks of ensuring the use of natural resources in equitable and ecologically sustainable ways and believes that building awareness at these intersections is critical. Inequality undermines the efficacy of environmental strategies and objectives, whereas advancing gender equality is a driver for positive change, an amplifier of benefits across sectors and a key aspect towards building resilience. Understanding that gender gaps are barriers to effective action, IUCN welcomes the launch of this gender and environment course and looks forward to not only using it as an essential knowledge-sharing tool but towards applying that knowledge for enhanced action.

Gender equality is a must if we are to build resilience of the ecosystems and the communities that depend on them. Through its work, IUCN recognises that women have differentiated roles and responsibilities in accessing, using and managing natural resources; understanding the potential of women and addressing barriers can unleash transformative results. In Mangroves for the Future (MFF), an initiative co-chaired by IUCN and UNDP on mangrove restoration, gender integration is a core strategy in several Asian countries, with results demonstrating that the meaningful inclusion of women in projects improve conservation, environment and equality outcomes. In Vietnam, gender integrated management in Xuan Thuy National Park allowed local impoverished fisherwomen to build sustainable livelihoods while contributing towards conservation efforts.

Across the environmental sphere, awareness of gender-environment links is steadily on the rise—and is evidenced by the powerful gender policies and action plans of GEF, its implementing agencies and other donors and governments around the world. Demand for information, knowledge, and capacities for gender-responsive strategies and action is high—and IUCN is at the forefront of supporting its members and partners on gender-environment links.

As a key partner of the GEF Gender Partnership, IUCN has helped generate new knowledge and data and developing gender-responsive methodologies. IUCN raises awareness of decision makers on gender and climate change connections and has led the development of nearly two dozen national and sub-national climate change gender action plans (ccGAPs) with governments & their stakeholders all over the world.

Currently, IUCN is working towards creating new data and information. In one partnership, we are working closely with UN Environment in creating global gender and environment indicators to build knowledge founded on data and to monitor progress. We are also undertaking cutting-edge research towards generating knowledge on gender-based violence and the environment. IUCN will also continue to support national governments in developing ccGAPs and provide technical assistance on gender and environment linkages to partners.

IUCN is also committed to disseminating this course: as a matter of fact, support towards the development of this course was provisioned under IUCN’s 2016 Course for Action on Gender, which aims to accelerate implementation of its longstanding gender policy. This course will be made available to all staff and will particularly equip gender focal points across the Union with comprehensive information and resources on key IUCN issues—from biodiversity, water and forests to climate change. Our Members and Commission members will also benefit.

Once capacities are built on gender considerations through this course, IUCN expects the demand for technical support, policy guidance, and practical implementation guidance to only increase—and we will stand ready to act, toward improving the lives and livelihoods of women and men in all regions of the world.

This is a cross-posted news article and originally appears here.