Every year, for 16 days, from the International Day for the Elimination of Violence against Women on 25 November to Human Rights Day on 10 December, people from all over the world campaign to raise awareness and galvanise action to end violence against women and girls. For the International Union for Conservation of Nature (IUCN), the campaign takes deeper meaning this year, as the Global Gender Office (GGO) – a part of IUCN’s Global Programme on Governance and Rights (GPGR) – has been working to better understand, document, and build technical guidance toward addressing the intersections between gender-based violence (GBV) and environmental issues.

Under Advancing Gender in the Environment (AGENT), IUCN works with in partnership with the US Agency for International Development (USAID) to strengthen environmental programming through gender integration, women’s empowerment, and achieving gender equality outcomes. A key area of this collaboration has been focused on researching the GBV-environment nexus, including drivers of violence across levels and sectors. The goal of the project is to review and collate existing knowledge and experience from across the globe to inform how the integration of GBV prevention and response in environmental programming can be strengthened. The project therefore aims to support enhanced environmental, sustainable development, women’s empowerment, and equality outcomes.

To this end, IUCN complemented an extensive literature review with a call for case studies and dissemination of a detailed survey (in English, Spanish and French) to 3,500 gender and/or environment practitioners and decision makers. The response has been clear: with over 100 case studies, 350+ surveys filled out and numerous informant interviews conducted, there is incredible demand across environmental sectors to better mitigate and respond to GBV. Initial survey results show that while the use of gender policies, frameworks and tools (e.g., manuals, gender analyses and sex-disaggregated data) are integrated in over half of respondents’ work, the integration of GBV issues specifically and its connections with the environment are scarce. But, alarmingly, as shown in Figure 1, more than half of respondents (59%) confirmed having observed GBV in the implementation of their projects.

Major challenges that persist in addressing GBV and the environment are in part due to the lack of understanding around how GBV might relate to environmental projects, along with the lack of access to data and information.

The AGENT study that will launch next year will be comprehensive, reviewing the links and drivers between GBV and the access to, use of and/or control over natural resources and land, especially related to tenure and rights; livelihoods linked to natural resources; energy; water and sanitation; and protected areas and biodiversity. It examines GBV within the context of natural resource governance and gender equality, reviewing its role within extractives, environmental crimes and how attacks on environmental human rights defenders are carried out, as well as workplace and community violence that women engaged in natural resource conservation activities experience. It will also discuss how environmental degradation, instability and crisis – including response measures – surrounding climate change, armed conflict, coping strategies and humanitarian crises have an impact on GBV (Figure 2). 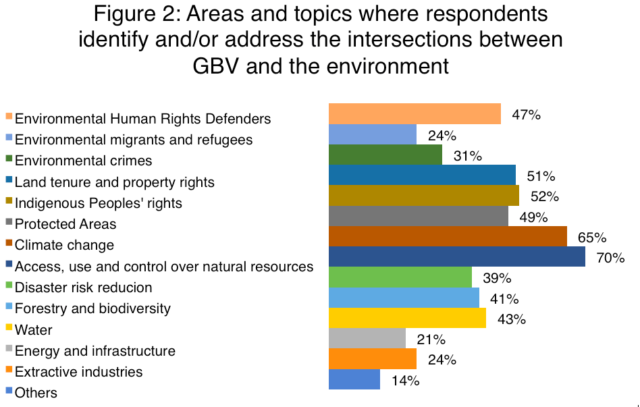 GRAPHIC BY IUCN
Responses to the IUCN-conducted survey show the numerous environmental sectors and issue areas wherein practitioners recognise the linkages between gender-based violence and their work.

Meanwhile, experiences from across the globe recount that women and girls are most affected by GBV, manifesting most prevalently as economic, psychological and physical violence. In some cases, there is a noted rise in GBV due to the presence and growth of extractive industries and male-dominated fisheries work, wherein the inflow or large numbers of men creates demand for commercial sex, at times resulting in the rise of criminal networks specialised in sexual exploitation.

In 2019, IUCN will complete its white paper, along with a series of technical tools, aimed to address and fill knowledge gaps while helping build capacities of partners to address GBV in environmental projects. A knowledge platform will provide a range of resources and guidance, as well. You can sign up for updates on the project and platform here. You can also get in touch with us if you are interested in addressing these issues.

In meantime, follow us on Twitter @IUCN_Gender and the #usaid_AGENT hashtag during these 16 days where we will share some of the many data points and information we’ve learned over the last year. You can also click here for more and subscribe for email updates to this project. Together, with knowledge and information, we will UNiTE to end violence against women. #HearMeToo

This blog was contributed by Jamie Wen-Besson with support from Itza Castañeda, Laura Sabater, Briana Mawby and Cate Owren and originally appears on IUCN.org.