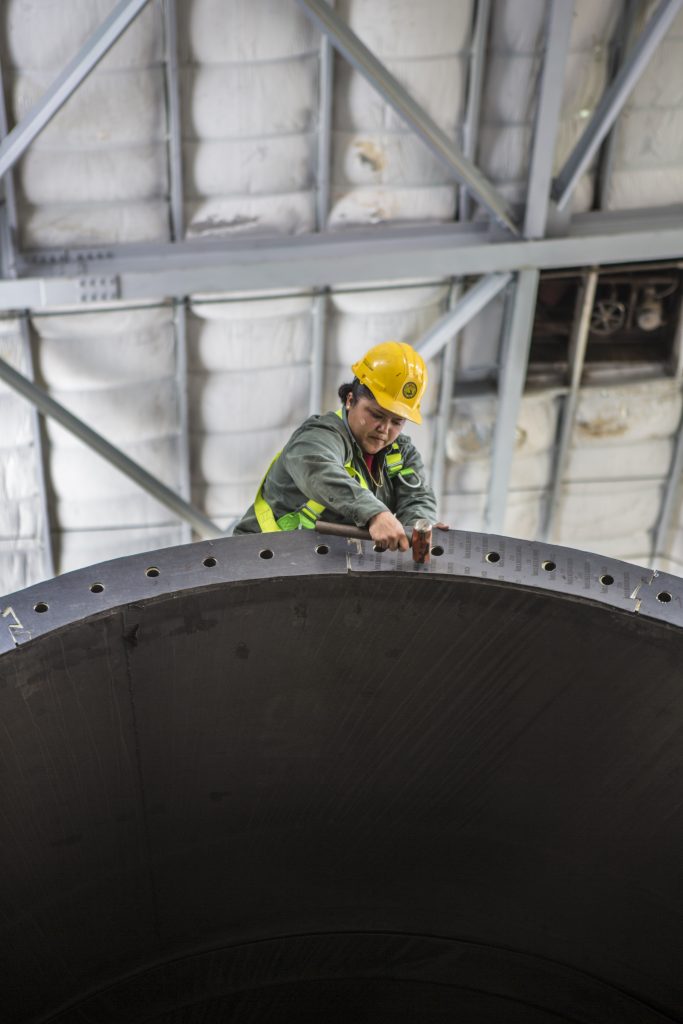 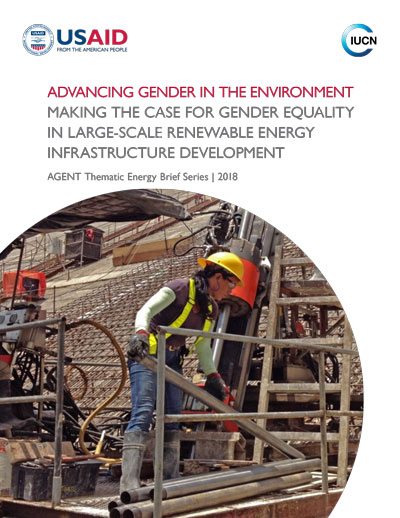 When stakeholders take gender considerations into account, renewable energy infrastructure projects have the potential to reduce gender disparities in neighboring or impacted communities, as well as increase access to resources and economic opportunities for women and men. 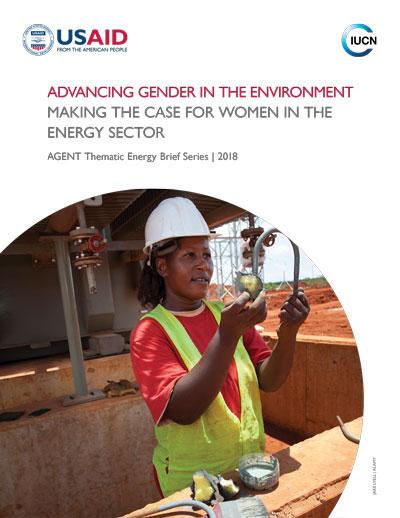 This brief provides an overview of the role of women in the formal energy sector. It presents evidence that women’s equal participation in the sector will result in measurable benefits, including increased returns on investments and stronger development outcomes. 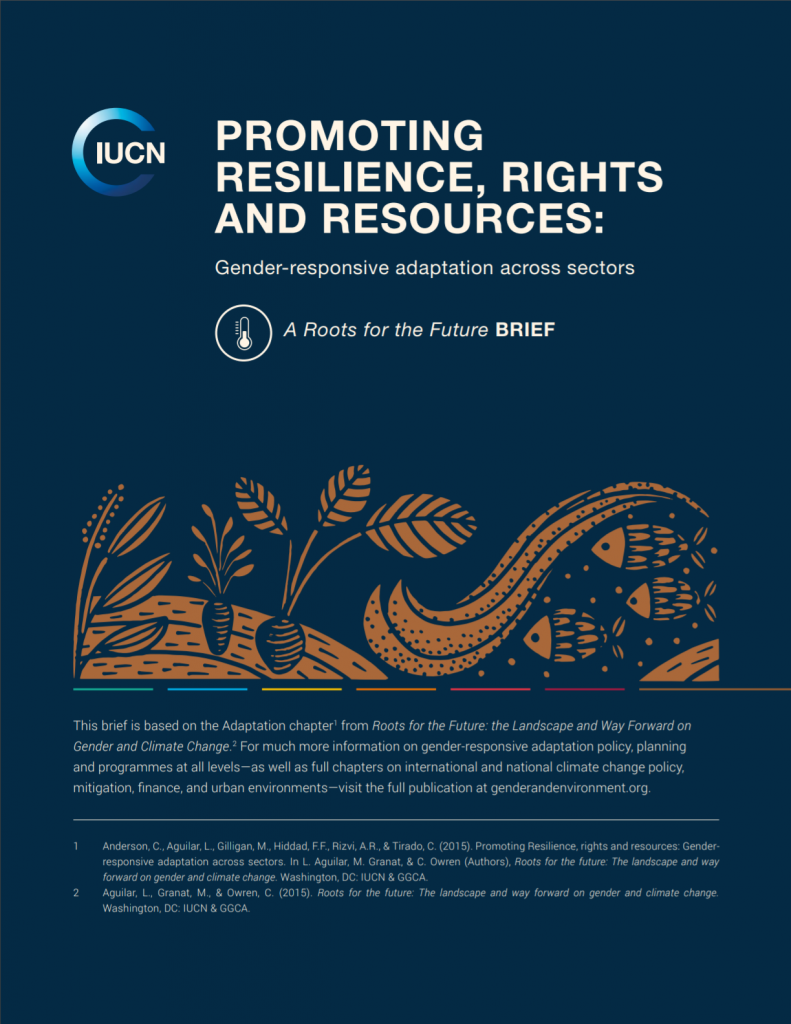 While mitigation efforts aim to reduce the causes of climate change (e.g., by addressing deforestation and advancing renewable energy), adaptation efforts attempt to address the impacts of climate change, such as droughts, floods, sea level rise, and intensified natural disasters, on people, structures and ecosystems. As climate continues to rapidly change in unprecedented ways, adaptation response is becoming increasingly critical, and identifying strategies are especially important for those living in areas susceptible to climate change impacts (e.g., those living in low-lying coastal areas) and for vulnerable groups, including women and poor populations, who often lack access to adaptive capacity measures. At the same time, adaptation interventions risk being less effective or efficient, or even exacerbating inequalities and inequities, when gender concerns and women’s unique needs and capacities are left out. 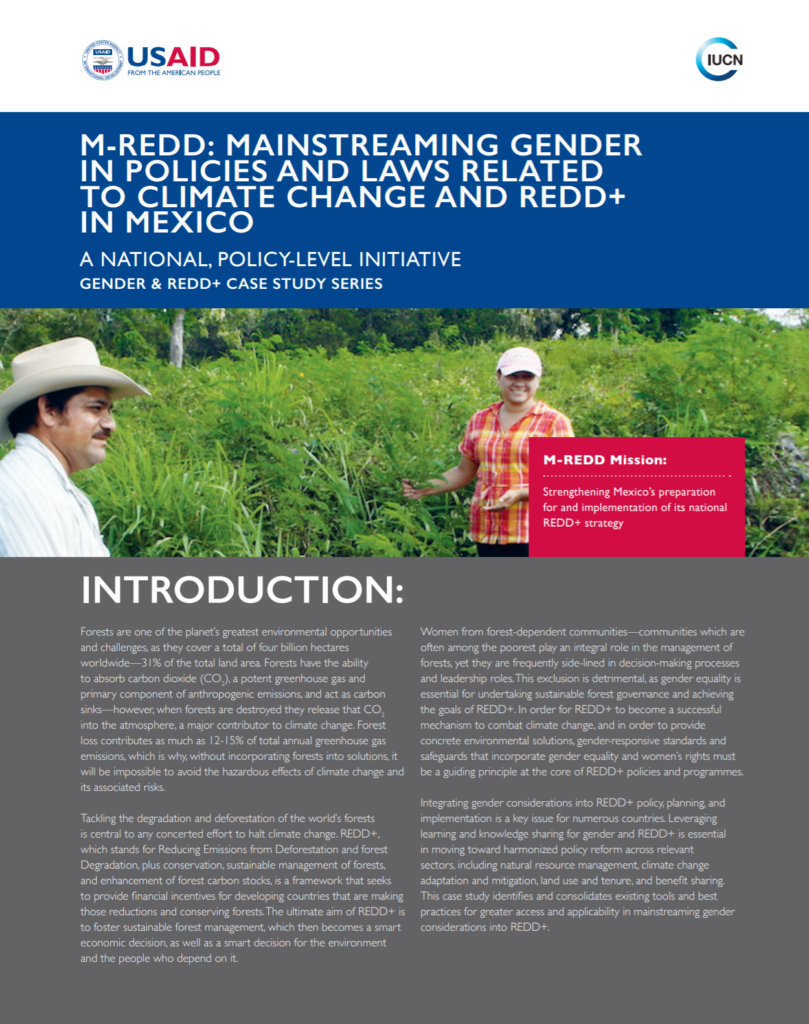 The Mexico REDD+ (M-REDD) Program is a six-year project, funded by USAID, that aims at strengthening Mexico’s preparation and implementation of the national REDD+ strategy by expanding its institutional and technical capacity, giving input on financial architecture, establishing systems, piloting diverse elements of the implementation of the REDD+ mechanism—including Measurement, Reporting and Verification (MRV) techniques—and contributing to the facilitation of the dialogue and broader public participation and transparency in the REDD+ process. Importantly, M-REDD has integrated a gender perspective from its start and implements gender-responsive strategies, including using REDD+ as an opportunity to enhance implementation of national mandates for advancing gender equality and ensuring women’s participation in REDD+ processes. The project endeavors to mainstream gender through its integration in national REDD+ public policy processes and piloting tools in field projects. This is being done by identifying tools that can make the role of women in different field activities more explicit and can be applied at different stages of implementation of field projects, such as silvopastoral ranching and conservation agriculture, in order to promote gender equality in people’s daily activities. With its recent extension, M-REDD will conclude in 2017. This case study highlights strategies for ensuring that gender considerations are understood at a national level and progressively taken into account in Mexico’s REDD+ legal and policy framework. 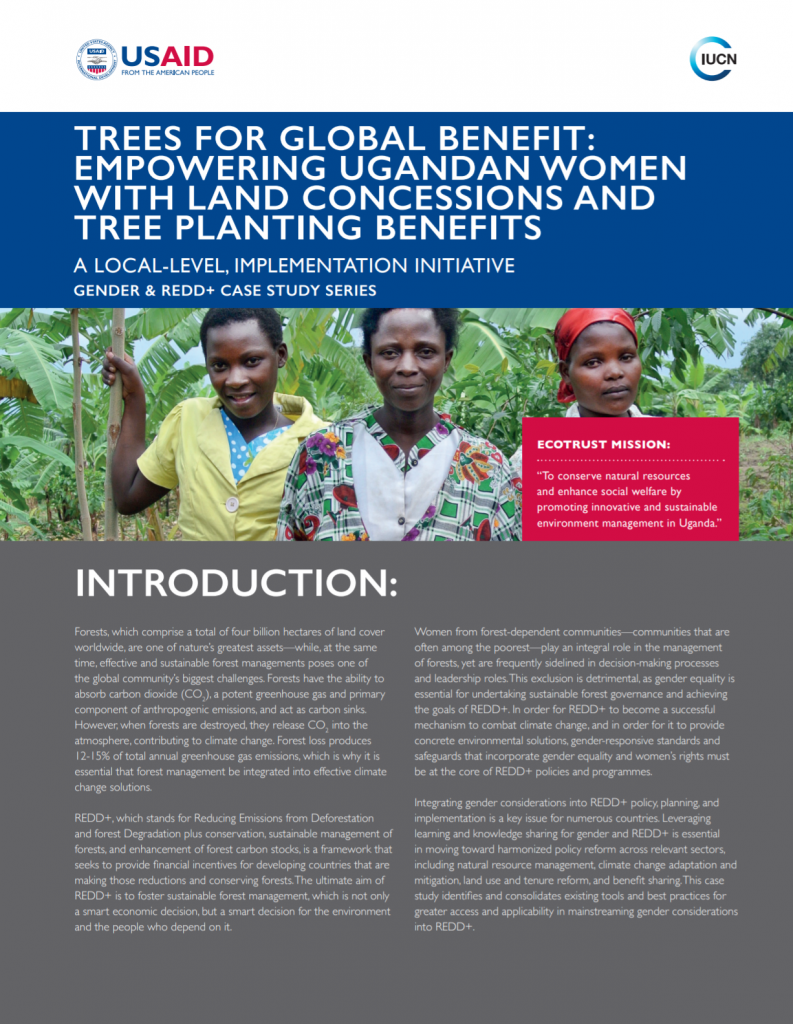 Trees for Global Benefit (TGB), an initiative of the Environmental Conservation Trust of Uganda (ECOTRUST), is a cooperative community carbon offset scheme developed to enable poverty reduction through effective management and protection of forestry ecosystems on which local people depend. TGB seeks to reduce unsustainable exploitation of forest resources and the decline of ecosystem quality, while diversifying and increasing incomes for rural farm families. This is most often achieved through Payments for Ecosystem Services (PES), decreasing unsustainable pressure on natural resources, reducing CO2 emissions, and building community resiliency. Small-scale landholders in rural areas have been involved in tree planting activities since TGB’s inception in 2002. 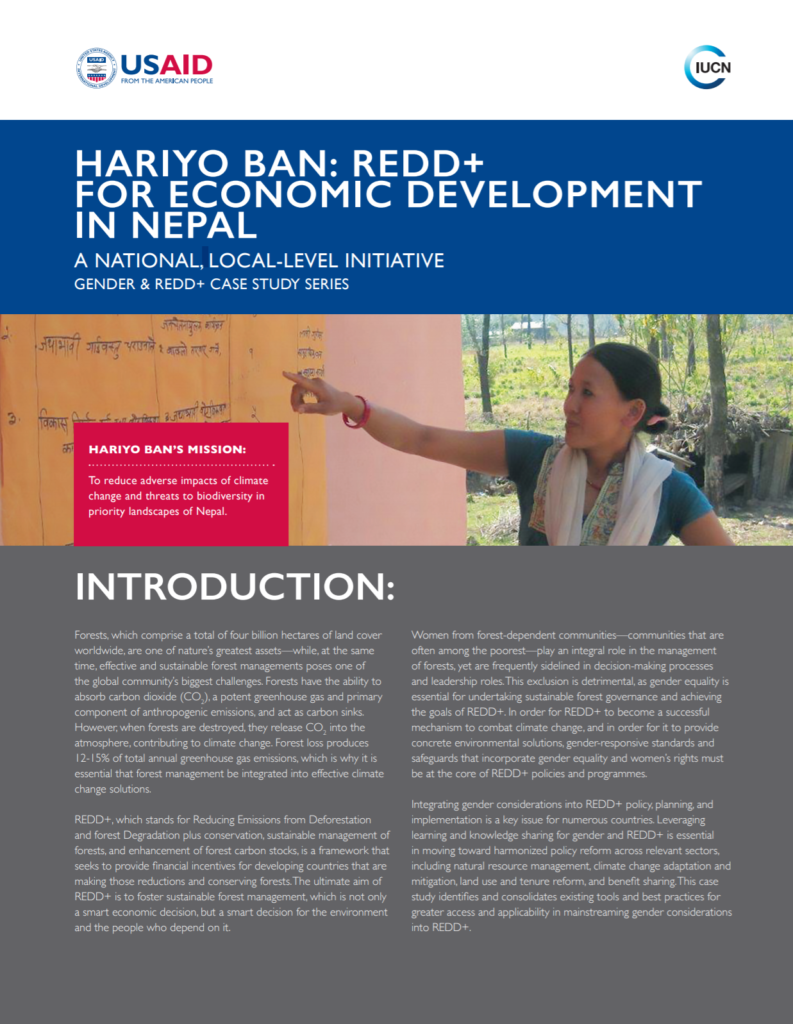 The Hariyo Ban project—which is named after the Nepali saying “Hariyo Ban Nepal ko Dhan” meaning “healthy green forests are the wealth of Nepal”—is a five-year initiative (2011-2016) that aims to reduce the adverse impacts of climate change and threats to biodiversity in Nepal. Beginning in 2011 and funded by the United States Agency for International Development (USAID), Hariyo Ban is designed to reduce threats to the country’s vast physical and biological diversity, build resilience to climate change in communities and ecosystems, and improve the livelihoods of Nepal’s most impoverished communities by emphasizing the links between people and forests. The project intends to ensure meaningful engagement of women and socially excluded groups in REDD+ initiatives by building their knowledge and capacity, as well as increasing gender-responsive REDD+ policy design. 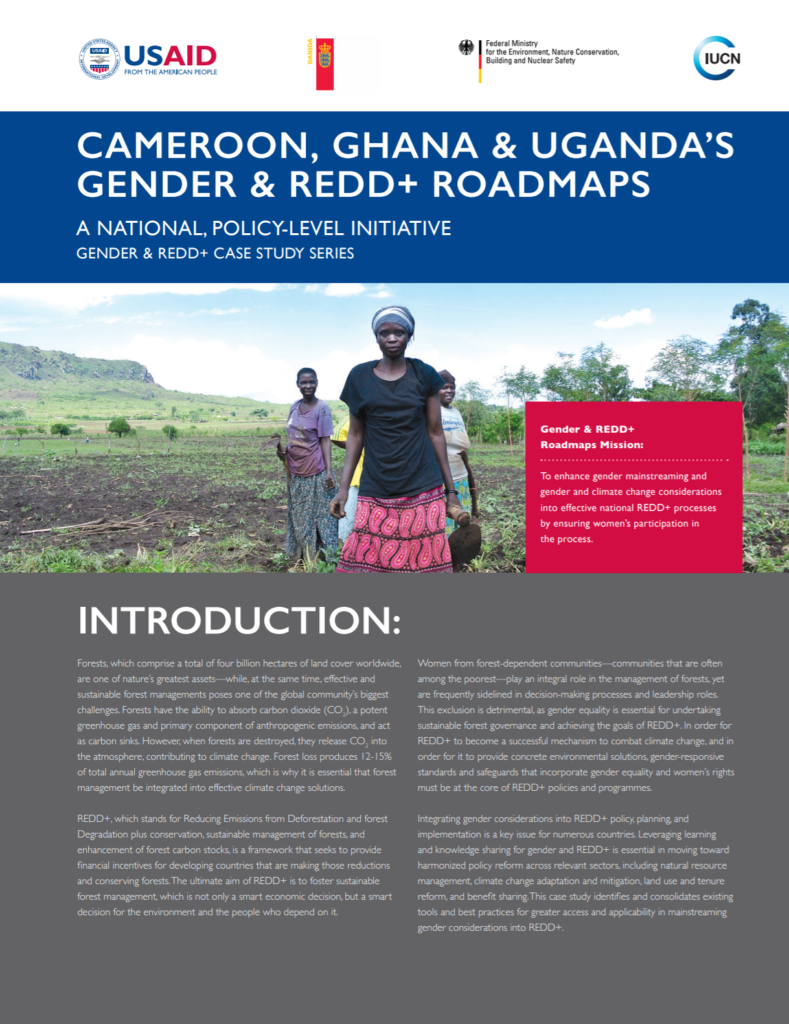 The United Nations Framework Convention on Climate Change (UNFCCC) Cancun Agreements in 2010 and Durban Outcomes in 2011 called for REDD+ national strategies and systems for providing information on how safeguards are being addressed and respected to integrate ‘gender considerations’. In 2011, the International Union for Conservation of Nature (IUCN), with support from the Danish International Development Agency (DANIDA), and in collaboration with the Women’s Environment and Development Organization (WEDO), facilitated participatory, multi-stakeholder workshops in Cameroon, Ghana, and Uganda to create Gender and REDD+ Roadmaps. The Roadmaps—the first of their kind—were produced during the first phase of the project for each country process and identified context-specific gender and REDD+ concerns, stakeholders, and concrete actions to integrate and enhance gender in REDD+ processes and initiatives. Currently, each Roadmap, as well as each country’s national REDD+ process, is in a different stage of implementation. Creation and facilitation of a Gender and REDD+ Task Force (GTF), or working group, is the most recent step to propel project outcomes forward and move closer to the project’s ultimate goal: to enhance gender mainstreaming and gender and climate change considerations into effective national REDD+ processes by ensuring women’s participation in the process.