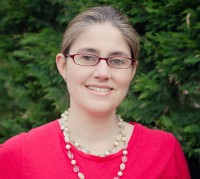 Ana has a background in environmental law, graduating from the University of Costa Rica (Law Bach. and Lic. degree in Law) in 2001 and later moving to the Netherlands to pursue her M.Sc. in Environmental Management at the Vrije Universiteit Amsterdam (2003-2004). She has built her expertise as a sustainable development specialist working on climate change, energy, poverty, gender, and sustainable development sectors.

Ana joined GGO in January 2015 and combines her current position with the provision of technical support to gender and mitigation pilot projects in the Mekong Region. She was a technical adviser to ENERGIA, the international network on gender and sustainable energy, for over 9 years; prior to which she had been a fellow at Both ENDS’s Strategic Cooperation Unit in the Netherlands (2004-2005) and an associate consultant at CEDARENA –a Costa Rican Environmental Law Center (1999-2003).

Born and raised in Costa Rica, Ana has lived in the Netherlands since 2003. She holds a double nationality and is fluent in Spanish, English and Dutch.