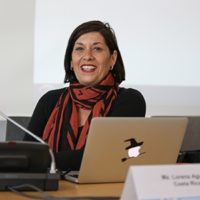 Lorena Aguilar has held the position of Global Senior Gender Adviser and head of the Global Gender Office (GGO) since 2002, following more than a decade with IUCN. She has more than 30 years of experience providing assistance to international organizations, governments, and universities on gender policy, gender equality, and women’s empowerment, as well as on water, forests, environmental health, and disaster risk reduction. Lorena’s expertise serves hundreds of partner organizations and has transformed the institutional identity of IUCN itself. As of August 2016, in recognition of her outstanding record in the promotion of rights-based governance approaches, she has also been appointed the Global Director of the Economics and Social Science Programme for IUCN. After a long career at IUCN, Lorena now serves as the Vice Chancellor of Costa Rica.

Lorena has created some of the most influential international gender networks, including the Network of Women Ministers and Leaders of the Environment (NWMLE) and the Global Gender and Climate Alliance (GGCA). She has been a board member of numerous reputable organizations, such as Women Organizing for Change in Agriculture and Natural Resource Management (WOCAN) and the 2006 Champion of the Earth laureate Women’s Environment and Development Organization (WEDO). Lorena has authored over 70 publications, including 30 books on gender, development, disaster risk reduction, forests, water, health, and environment, and is a sought-after keynote speaker at international conferences, congresses, and other high-level events.