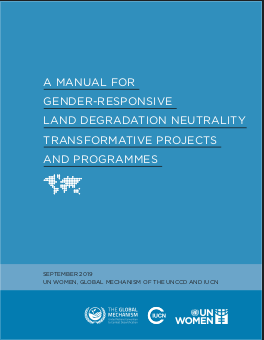 Author: UN Women, Global Mechanism of the UNCCD and IUCN (2019)

Climate- and human-induced land degradation endangers the future survival of our planet. A new focus on achieving Land Degradation Neutrality (LDN) seeks to spark and grow transformative efforts to avoid, reduce and reverse land degradation through gender- and socially-equitable means. As of July 2019, 122 countries of the 169 countries directly affected by desertification, land degradation or drought pledged to achieve land degradation neutrality at the national or sub-national level. More than 82 countries have already set LDN targets towards halting land degradation by 2030, and 44 of the 70 countries regularly hit by drought are setting up drought management plans to ensure that droughts do not turn into disasters. Many of the targets entail co-benefits for sustainable agriculture and food security, and link to the Sustainable Development Goals (SDGs) to advance gender equality, increase women’s equal access to and control over land and natural resources, improve health and nutrition, reduce poverty, and restore ecosystems and climate change impacts.

This manual provides step-by-step guidance to Parties on integrating gender issues and promoting gender equality in the design of transformative LDN projects. It builds on work launched by UN Women, the Global Mechanism of the United Nations Convention to Combat Desertification (UNCCD) and the International Union on the Conservation of Nature (IUCN) in advising governments on integrating gender perspectives in the development of LDN initiatives, as mandated by the UNCCD Gender Action Plan (GAP), the Science Policy Interface LDN Conceptual Framework and related decisions adopted by the Conference of the Parties.