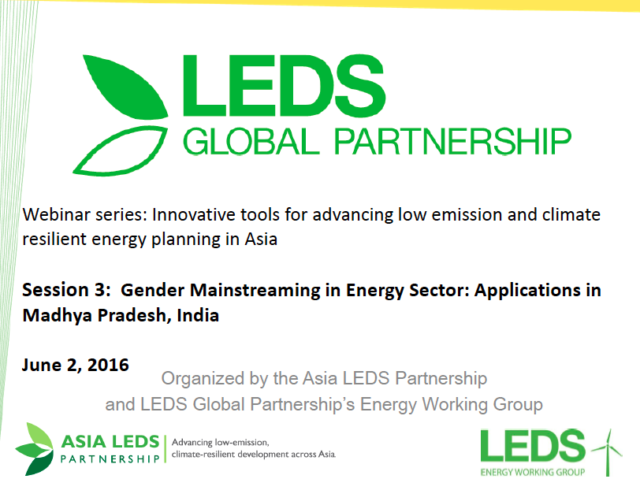 This webinar is a cooperation of the Asia LEDS Partnership and the Energy Working Group of LEDS GP, the Gender Equality for Climate Change Opportunities (GECCO)* initiative, a five-year program launched by USAID and IUCN in 2014 which overall goal is to leverage advancements in women’s empowerment and gender equality, and ENERGIA, the International Network on Gender and Sustainable Energy. It demonstrates how gender methodologies have been designed for the energy sector and applied in Asia.

The webinar focuses on mainstreaming gender in energy sector projects and programmes, which should enable both women and men to benefit equally from energy projects, reduce gender inequalities, and empower women.

The webinar will also present a specific case study to demonstrate gender mainstreaming approaches. The Asian Development Bank has been supporting the Energy Department of the Government of Madhya Pradesh, India, as part of the Regional Technical Assistance (RETA) Enhancing Energy Based Livelihoods for Women Micro-Entrepreneurs. As part of a Gender Action Plan, over 20,000 women entrepreneurs have been trained on business improvement and benefitted from enhanced energy access. More than 500 enterprises have adopted electricity-based improvements, reaffirming the proposition that with appropriate enabling conditions, women can make significant contributions to the energy sector and use energy as an instrument for enhancing their livelihoods.

Click here to see a PDF of the presentations.