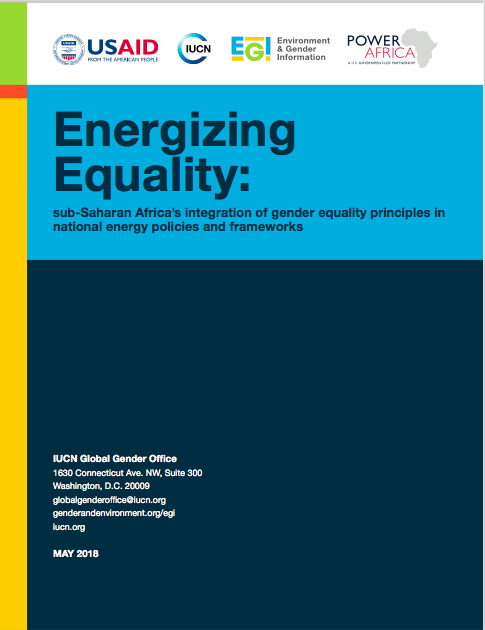 Two out of three people living in sub-Saharan Africa (SSA) lack access to electricity and reliable energy sources. Ensuring universal access to sustainable forms of energy is a key global development goal and is essential to improving the lives and livelihoods of women and men on the continent. A 2017 International Union for Conservation of Nature (IUCN) Global Gender Office (GGO) analysis of 192 energy frameworks found that sub-Saharan Africa is the world’s regional leader in acknowledging gender considerations in national energy frameworks. To continue to understand the extent to which gender considerations are being integrated in national energy frameworks across SSA, IUCN GGO, in coordination with Power Africa, conducted an assessment of 45 energy frameworks from 29 different SSA countries.

This assessment has been conducted to identify and understand the degree to which gender considerations have been addressed in energy policies, plans and strategies worldwide. Findings offer insights into the ways in which governments are recognizing gender considerations in the context of their energy policymaking and planning and trends with respect to key cross-cutting gender issues and regional comparisons.

This assessment was developed under the Advancing Gender in the Environment (AGENT) initiative, a ten-year program launched by the United States Agency for International Development (USAID) and implemented by IUCN.